To share your memory on the wall of Edith Garneau, sign in using one of the following options:

Born and raised in Auburn, Edie was one of twelve children born to the late Frank E. and Irma L. (Batcheldor) Thomas. She was a graduate of Auburn High School, where she met her late husband, Fran (Fuzzy) Garneau. Right after high school, Edie started working as an Operator at the Telephone Company alongside her best friend Ginny Bennett. In the 1960’s, she and Fuzzy became co-owners of the Brunswick Hotel in Old Orchard Beach, ME, until she sold it in the early 1980’s. She also spent many years at Cullinan Engineering in Auburn, as a Receptionist where she loved to tell a good joke to all her co-workers; she had a great sense of humor.

In the early years, Edie crocheted many colorful afghans that have now been passed on to her grandchildren. She loved creating beautiful flower planters, sitting on her deck watching the hummingbirds and cardinals while listening to her wind chimes. Edie was an avid walker, even later in life. She was well known for walking around the building at Brookdale at Eddy Pond East while picking up pinecones for the ladies to use during craft time. One of her favorite past times was watching the Boston Red Sox, and she prided herself on knowing all the players by name and number while her favorite announcer, Jerry Remy called the games. Every year, Edie would travel to Maine to spend Christmas with her family where they would share wonderful memories, play games, and she would pass along treasured recipes, like her infamous cheese ball recipe.

She leaves her daughters, Debra A. Soucy and her husband Robert, of Bridgton, ME, Pamela A. Camosse and her husband Henry Camosse, Jr., of Charlton, and Lisa A. Parlin and her husband Richard, of Gorham, ME; her grandchildren, Jay, Chris, and Francis Camosse, Jeff Soucy, Emily Mougalian, and Nick and Eric Parlin; her great-grandchildren, to whom she was lovingly known as “GiGi,” Mayson, Skylar, Landon, and Kairos; her siblings, Carlton Thomas and his wife Shirley, of Oxford, and Helen Soponski and her husband Donald, of Auburn; many nieces, nephews, great-nieces, and great-nephews; and her life-long friends, Robert and Barbara O’Toole, of Dudley. Along with her parents and her husband, Edie was predeceased by her siblings: Olive Austin, Everett Thomas, Robert Thomas, Alice Romek, Gilbert Thomas, Joyce Thomas, Warren Thomas, and, most recently, Janet LaPrad and Frank Thomas.

In lieu of flowers, memorial donations may be made to the Massachusetts Commission for the Blind, 600 Washington Street, Boston, MA 02111; Attention: Shandra Gardner.

Services and burial will be held privately for Edie’s family. The Britton-Wallace Funeral Home, 91 Central Street, Auburn, is honored to be assisting with arrangements.
Read Less

Receive notifications about information and event scheduling for Edith

Print
Services will be held privately for Edie's family.

We encourage you to share your most beloved memories of Edith here, so that the family and other loved ones can always see it. You can upload cherished photographs, or share your favorite stories, and can even comment on those shared by others.

Posted Apr 18, 2021 at 07:26pm
I was so saddened and shocked to hear of Edie’s passing after returning from time off at Brookdale. I loved our chats and her very much, and will miss her terribly. You are a wonderful family and I send my deepest condolences to you all.
Much love,
Angela Govoni (from Brookdale)
Comment Share
Share via: 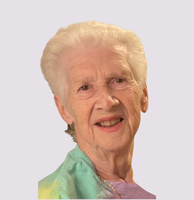