To share your memory on the wall of Michelina Villani, sign in using one of the following options:

Print
Michelina (Nardella) Villani, 83, skilled seamstress and dressmaker, of Shrewsbury and formerly of San Marco in Lamis, Foggia, Italy, passed away peacefully on Tuesday, April 27, 2021 after a lengthy battle with ALS.

She leaves her belov... Read More
Michelina (Nardella) Villani, 83, skilled seamstress and dressmaker, of Shrewsbury and formerly of San Marco in Lamis, Foggia, Italy, passed away peacefully on Tuesday, April 27, 2021 after a lengthy battle with ALS.

Born to the late Maria LaPorta and Michele Nardella, and raised by Arcangela Masullo and Giuseppe Villani, Michelina was educated in her hometown and apprenticed as a seamstress. She and her husband emigrated to the U.S. in 1971 and settled in Shrewsbury with their five children to begin their life in the U.S., and a sixth child was born in 1980.

Michelina owned her own seamstress business for over 40 years, creating some of the most beautiful wedding dresses with clients throughout the Northeast. Her greatest gift was giving that special bride a unique item on their wedding day. She had a way of making everyone feel special. Her shop was full of pictures of brides on their wedding day and pictures of her family and grandchildren.

One of her greatest pleasures was Sunday lunches, a gathering of 26. A full house was her love. She saw her family grow from 6 children and adding 6 spouses and then 12 grandchildren. She will simply be remembered as Nonna!

In lieu of flowers, memorial donations may be made to Compassionate Care ALS (ccals.org/donate) or mail to P.O. Box 1052, West Falmouth, MA 02574.

Relatives and friends are invited to visit with the Villani family between 10 and 11 AM on Saturday, May 1, 2021 at St. Mary’s Church, 640 Main Street, Shrewsbury – her funeral Mass will be celebrated at 11, followed by burial in Mountain View Cemetery, Shrewsbury. The Britton-Shrewsbury Funeral Home is honored to be assisting with arrangements.

Receive notifications about information and event scheduling for Michelina

Consider providing a gift of comfort for the family of Michelina Villani by sending flowers.

We encourage you to share your most beloved memories of Michelina here, so that the family and other loved ones can always see it. You can upload cherished photographs, or share your favorite stories, and can even comment on those shared by others.

We are both saddened by your Mom's passing. We remember meeting her and your Dad at your home some years ago and right away they made us feel so welcome! We ask Almighty God to bestow His Choicest Blessings upon the Villlani Family...not only in this time of loss..but always,

Posted Apr 29, 2021 at 01:41pm
What a great lady with a huge heart for family and friends. Mrs. Villani's love and hospitality knew no bounds, she shared her love for others like sugar being tossed about. We enjoyed times in her home breaking bread and sharing stories as well as celebrating the holidays. Mrs. Villani may have been short in stature, but extremely tall in character. Her legacy lives on through her family. We celebrate her receipt into God's kingdom and surely she is a lead baker at our Lord's table. May the love of Christ provide her beloved husband and family comfort, peace, and healing in this time. Nazal Family
Comment Share
Share via:
RP

Posted Apr 28, 2021 at 08:12pm
Michele and family my husband and I were so very very sorry to learn about Michelina’s passing. She was the most caring and sweet lady. We spent several evenings enjoying her food, family all of her stories. She always made us feel welcomed in her home. The love she had for you Michele, and her children and grandchildren was so obvious. We will miss her beautiful smile and friendship. Love to all of you. Prayers for your entire family. Roxanne and Rich Polli
Comment Share
Share via: 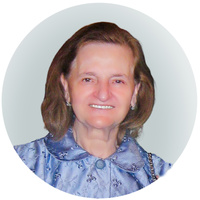